Gabbeh rug is one of the few original Iranian rugs that has been popular in many villages since ancient times, especially among the nomads. Today, rugs are one of the most important elements in interior decoration and play an important role in enlivening the interior of the building. Gabbeh rugs, like other Iranian rugs, have very beautiful designs and special patterns that you will not find anywhere else in the world! 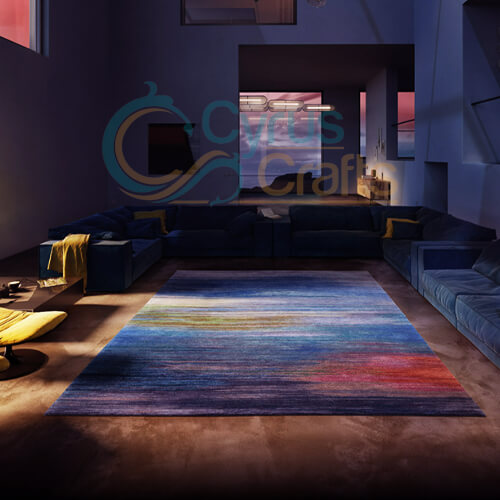 Depending on the type of texture, yarn, and designs, Iranian rugs including silk carpets, wall-mount rug tableaus, kilims, carpets, area rugs, as well as "Gabbeh rugs" have a lot of variety. In this article, useful explanations are provided about the features, weaving method, types of designs, and the colors used in the Gabbeh rugs. 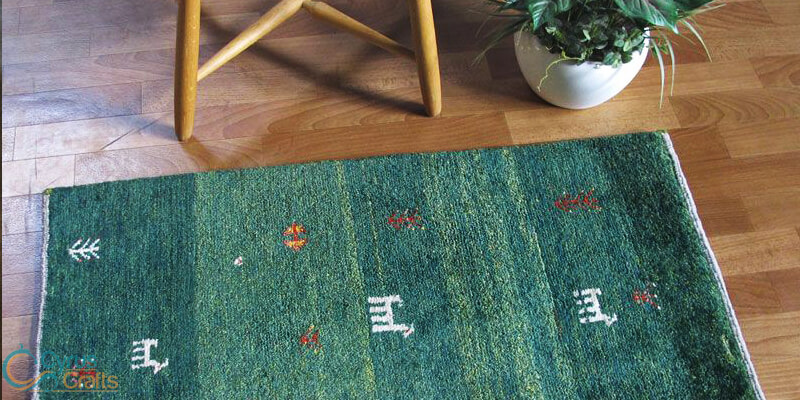 Features of the Persian Gabbeh rugs

In order to be able to give you more information about the Gabbeh rugs, it is better to pay attention to their features, including the type of texture and designs. Gabbeh rugs are often known as a type of handmade rugs because, in the past, nomadic women wove Gabbeh rugs with their hands and on horizontal carpet looms (looms lying on the ground) and also without a plan and just by using the mind and creativity of the weaver; but today, this kind of rugs is produced in various designs both manually and by machine, which gives you more options to choose from.

If you are planning to buy a Gabbeh rug, you should know that the number of reeds and density has a great impact on the life and quality of the carpet, because carpets with higher density have a finer texture and greater durability.

However, Gabbeh handmade rugs are woven in the form of knots with long piles, the piles of which are usually one to three centimeters long. In the past, Gabbeh rugs were woven only for personal use, but now this beautiful rug has found many fans not only in Iran but also all over the world. For this reason, the production and export of Gabbeh rugs have made those interested in this art more familiar with Persian art and culture.

Gabbeh rugs are usually woven in the "Persian" style of weaving, but the nomads have used the "Turkish" style as well. The spring wool, which is spun by hand and dyed with plant and natural methods, is used to weave high-quality Gabbeh rugs. 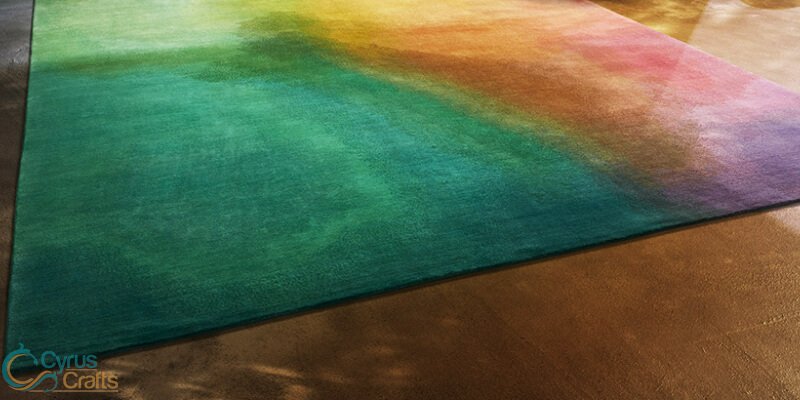 Since sometimes there is no pre-determined pattern or motif for Gabbeh weaving and the weavers weave Gabbeh according to their own spirits, taste, and creativity, or they are inspired by their surroundings. It can be said that weavers leave a part of their soul in their work. With this idea, you can better understand the artistic and historical value of Gabbeh and realize that this is not just a rug to cover the ground.

The most famous Gabbeh rugs belong to the Qashqai tribes of Iran, the most important motifs of which are:

In this type of Gabbeh rug, a rectangular frame is placed in the middle and different motifs in small sizes are regularly placed inside it, which can be said to have a tile-like motif. Inside each tile or frame is woven motifs such as flowers, trees, animals, birds, etc, and in some frames are decorative star motifs.

Some Gabbeh rugs are also woven with a black and white checkered pattern, which is symbolic and represents the days of nomadic weavers. The white and black parts represent good and bad days, respectively. For this reason, it sometimes happened that several black squares or several white squares were located next to each other.

Gabbeh rugs with motifs of lion

The lion motif on the Gabbeh rugs is one of the most popular motifs among the tribes and nomads of southwestern Iran. The lion motif has always had a special place in Persian culture.

The lion is a symbol of strength, courage, and sobriety among Iranians and has a special place in Iranian culture. As mentioned, weavers were inspired by the nature around them to weave Gabbeh rugs. It should be noted that in the past, many lions lived in the Fars province of Iran, which have become extinct over time. For this reason, the motif of the lion is often seen in the texture of the Gabbeh rugs woven in these areas.

Gabbeh rugs with motifs of flower

Sometimes the motif of rose is used in the texture of Gabbeh rugs. This type of Gabbeh rug is also called Gabbeh with a floral motif. In the background of the rug are flowers of different colors and green leaves; and in the margins, other patterns are woven. Usually, the color of the flowers in the background of a Gabbeh rug is different from the color of the flowers used in the margins (borders).

Gabbeh rugs with motifs of Pool

Gabbeh rugs with motifs of tree

The tree was another symbol or motif used by nomads and villagers in the weaving of Gabbeh rugs. Trees, like other natural elements, have existed since the beginning of human creation and have played a major role in human life. Motifs of weeping willow and cypress tree are often seen in the texture of Gabbeh rugs. The cypress tree is a symbol of joy and happiness and the weeping willow is a symbol of sorrow and grief.

This motif is also one of the motifs that are widely used in Gabbeh weaving. The tribal motifs have no special role and are woven in an improvisational way. Gabbeh rugs with tribal motifs usually have a frame with a geometric shape such as square, rectangle, circle, oval, or rhombus, each of which is decorated with motifs from nature such as flowers, plants, and trees; and weavers choose the color of each based on their taste.

The term “brindled motif” refers to colorful jewelry used to adorn and beautify horses; but in Gabbeh weaving, the term is used to create a light shade in the design using streaked colored threads. The brindled motif is inspired by barley and wheat fields as the wind blows through their clusters. Brindled motifs are usually used for backgrounds or borders.

As its name suggests, this motif has a simple appearance and uses geometric shapes such as triangles, rhombuses, squares, ovals etc. Geometric motifs have different types such as frame layout, Joshghani, Khatam Shiraz, star, and Khatai motifs.

The name of this type of Gabbeh signifies the motifs used in it. Different scenes of each season can be seen on these Gabbeh rugs.

Gabbeh rugs with motifs of duck

This motif belongs to one of the Qashqai tribes, Shorkhani, that often spends the summer around the city of Abadeh. In this type of Gabbeh, the shapes are placed symmetrically and repetitively in a row and cover the entire background.

Machine-knotted ones have an acceptable quality, but due to the natural and non-chemical dyeing, artistic value, and high quality of Hand-knotted Gabbeh rugs, they can have higher prices compared to machine-knotted ones.

Here at Cyruscrafts, you can buy premium Gabbeh rugs at the best prices. Gabbeh rug's price depends on the quality, type of texture, weaving technique, dyeing, ETC. It can approximately vary from $40 to $1270.

Initially, the wool of animals such as sheep, goats, camels, etc. was used in weaving Gabbeh with the same natural color of the wool, which is usually cream, brown, black or white. But over time, with the migration of nomads and their familiarity with a variety of natural colors, as well as how to use them to dye wool, Gabbeh weaving with a variety of colors gradually became more common.

This combination of colors in Gabbeh rugs reflects the spirits of the nomads because the colors are taken from nature and the plants in which they live.

For example, red, which is a warm and extroverted color in Gabbeh weaving, is a symbol of activity, ability, and strengthening of the heart, as well as struggle, truth, and martyrdom, and inspires excitement in the viewer.

The yellow color which is known as the color of youth, light, and brightness, is joyful and it is a sign of knowledge and it is very important among the tribes.

Purple is also used to mean ignorance, difficulty, and cruelty, and is said to be a mysterious color that evokes emotions, sometimes even instilling fear in the viewer.

In this article, we tried to cover all the important facts about Gabbeh rugs and different types of them in order to make you more familiar with the original Iranian culture and its special arts, which have a long history.

You must know that Persian carpets have been produced, supplied, and exported for many years, but we hope that considering the capabilities and knowledge available in the Cyruscrafts collection, they will take a greater share in the global markets.

Cyruscrafts collection with specialized activity in the field of preparing, selling, and exporting the best samples of Gabbeh rugs, provides you with high quality and inimitable products to Canada, USA and Europe so that you can experience a wonderful and unique feeling in the decoration of your home or workplace.