Art galleries reflect a society's entire culture, thought, and art! Paintings, pictures, carpets, and other handicrafts are examples of artifacts and cultural products that have existed in various human societies and whose popularity has spread to new generations and countries. Paintings, marquetry paintings, tableau rugs, calligraphy, and various types of illustrations using different materials have been popular in Iran since ancient times and are among the country's most important artistic elements.

It is impossible to say when the history of painting in Iran began; however, evidence of drawing by early humans in the Paleolithic period has been discovered. Furthermore, some painted pottery has been discovered in Sialk hills and Shush, confirming this.

Iran is well-known not only for its paintings but also for its tableau rugs and hand-made relief paintings.

tips when buying a Decorative tableau and Wall Decoration

The use of modern paintings in interior design not only creates calm and beautifies the environment, but also reflects the homeowner's unique artistic taste. The following guidelines will help you select the best paintings for your home decor.

If the decoration of your home is such that the number of furniture and appliances are small and spaced far apart, in this case, placing a modern painting on the wall between them effectively fills the perspective.

The wall above the sofa is a great place to hang classic and modern paintings. When selecting a painting, keep in mind that the size of the painting should not be larger than the size of the sofa. In general, the ideal size for a decorative painting is roughly two-thirds the size of a sofa or slightly larger.

The right painting for each wall should be chosen based on its dimensions or even the material of the wall. Vertical paintings are preferable for high and rectangular walls. Horizontal paintings work best on short and long walls, such as corridor walls. In general, the paintings should be able to occupy at least two-thirds and no more than three-quarters of the walls after installation.

If the wall is made of stone or brick, using paintings with a predominant color of brown or gray can help to create a harmonious environment.

When selecting a frame for paintings and tableau rugs, it is critical to remember that classic and heavy frames with crowded and aristocratic decorations should not be used for modern works. For instance, light, less-decorated frames, preferably in a single, simple color, are ideal for abstract paintings.

Color is used differently depending on the style and type of painting, as we all know. For example, in abstract paintings, the use of multiple colors, as well as the bold use of sharp and concentrated colors, is very common. However, in terms of color scheme or even subject matter, your painting should be able to blend in with other home furnishings. A pale yellow in the painting and a small vase on the table can sometimes achieve this color match.

Traditional Iranian picture and tablou had a special place among Iranian handicrafts since the time there was no sign of technology and mechanization. 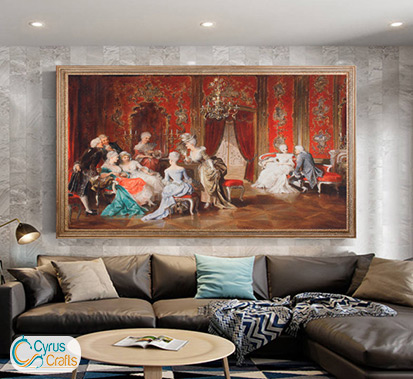 Asia is the heart of 7,000 years of civilization, and Iran has inherited this valuable heritage. Iranian culture has made Aryan civilization noticeable in many Persian handicrafts, especially traditional Persian pictures, and tablou. Taking a tour in the traditional markets of Isfahan, Tabriz, Tehran, etc. is enough to reveal the most beautiful traditional pictures that come from the ancient Iranian culture.

Today, some people seek refuge in traditional artists to escape from the modern world and to embrace peace through handicrafts. The proponents of this taste and talent take a deep look at traditional signs and consider them beyond an ancient industry, an industry that every ethnic group and culture in Iran knows its spirit and appreciates.

The ancient hereditarians of Iran have been able to create beautiful traditional Persian pictures, distinct from other pictures all around the world. Thus, the name of Iran shines with its handicrafts like tablou, pictures, etc.

Undoubtedly, these artworks are one of the most beautiful interior design arrays that can have a special effect on the walls, niches, and corners of any traditional and even modern space. Everybody knows that pictures and tablou are presented in a variety of different ways, and, perhaps, the most appealing kind of them are Iranian pictures and tableaus with noble designs that can display the originality, culture, and art of the people of every land.

In these beautiful art collections, there are pictures adorned with poems by famous Iranian poets such as Saadi, Hafez, Khayyam, etc. They are also adorned with the handwork of artists as beautiful tablou carpets, paintings, mosaics, etc. In each of these pictures, there is a trace of the Iranian culture, taste, and originality, which is pleasing to scholars and enthusiasts. 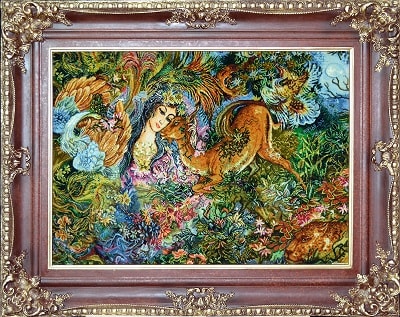 Oil paintings are among the most exquisite types of artworks. From 1400 AD onwards, this style of painting was considered and spread from Eastern to Northern Europe. The oil used to make oil paint is extracted from the seeds of plants such as flax, poppy, walnut, flaxseed, and others. Painting such paintings necessitates the study of art as well as the acquisition of special techniques, practice, and skills. Many skilled painters in Iran use oil painting techniques to create their works, which are typically painted in two finishes: matte and glossy. 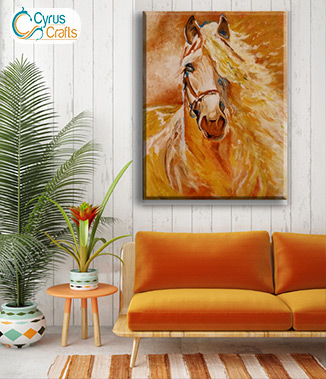 Iranian tableau rugs, like Iranian carpets, are well-known and distinctive. This type of rug is similar to handmade carpets, but in smaller sizes with unique designs and colors that are used as building interior decorations on the walls. The woven carpet is not only a beautiful painting and work of art that adds spirit to a simple environment, but the frames of the tableau rugs are also a type of handicraft. 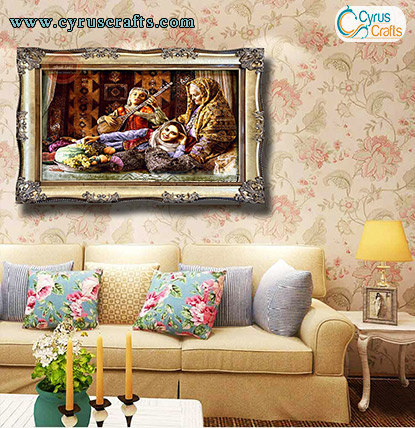 Marquetry tableau, be different from thousands

Marquetry is a work of art in which small pieces of wood, metal, fabric, tiles and other materials are arranged next to each other in various shapes and forms in a regular and beautiful pattern. In other words, marquetry is the process of creating a beautiful design with various materials on wooden handicrafts such as tables, chessboards, jewelry boxes, or in the form of very beautiful tableaus. Marquetry tableaus are another type of handicraft, as well as one of Iran's cultural and traditional attractions. Marquetry has been used as various decorative since ancient times, particularly with arabesque motifs. Trees such as seaberry, ebony, pear, and mulberry are the best woods for creating marquetry tableaus in a variety of colors and textures.

If you do not like traditional paintings, you should be aware that there is now a plethora of modern and fancy paintings that are designed and printed by computer. For this type of painting, very simple and modern frames are typically used.

Depending on the people's preferences and the type of decoration, modern paintings can be single or multiple. Multiple types of modern paintings come in a variety of shapes and sizes. Sometimes an image is designed in such a way that each part of it is placed in a separate frame, and when two or three frames are combined, we can see the entire image. However, by combining the same colors, different but related images can be designed separately for each frame. 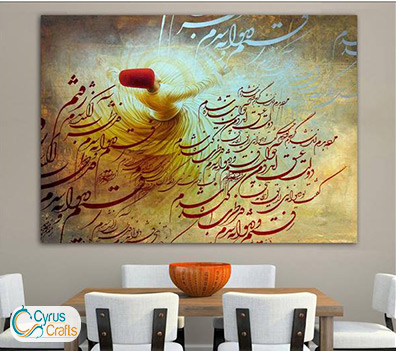 The CyrusCrafts is dedicated to presenting to the world the most beautiful traditional Iranian and Oriental pictures that exhibit the art of noble oriental artists. 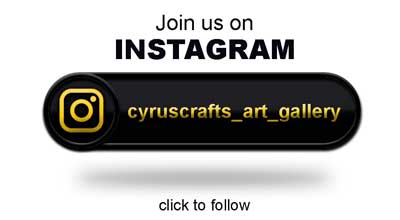 A prayer for love-Persian Wall Decor

Decorative Calligraphy "The Sound of Silence"

Decorative Calligraphy "The Miracle of God"

Decorative Calligraphy "The Message from Fishes"

Decorative Calligraphy "There Is No God But Allah"