Ancient Persia’s advanced culture and economy, as well as its dedication to scientific, artistic, and cultural development, called for a tool to preserve and pass knowledge on to future generations. This need was started by the advent of cuneiform in circa 4,000 BC and has now reached the Nasta'liq script and calligraphy.

The Persian writing system as we know it today originated about 1,000 years ago. A combination of the Semitic, Arabic (Quran-based calligraphies such as ayatul kursi calligraphy), Kufic, and other scripts, the writing system offered a vast field for artistic creation. Thanks to its visual excellence and originality, the Persian script is considered a form of fine art.

Different types of calligraphy tableaus to buy Online on CyrusCrafts

Artists of Persian calligraphy use a wealth of styles in their work. Here are the most popular and frequent of them:

A relatively recent and originally Iranian style, the calligraphic painting combines two art forms in a creative, modern fashion. The style has become highly popular in Iran and other countries and is frequently used as a décor element.

The tughra style of calligraphy was historically used to write the name and honorary titles of sultans in the form of a signature or seal. Stylistically, a tughra is an elaborate composition of curves, straight lines, and loops.

All successive letters and words in this style join together, creating a beautiful uninterrupted calligraphic sequence.

This style is characterized by symmetry; that is, letters are mirrored about an axis.

A calligram consists of letters and words arranged creatively to form an image such as a human face or an animal. 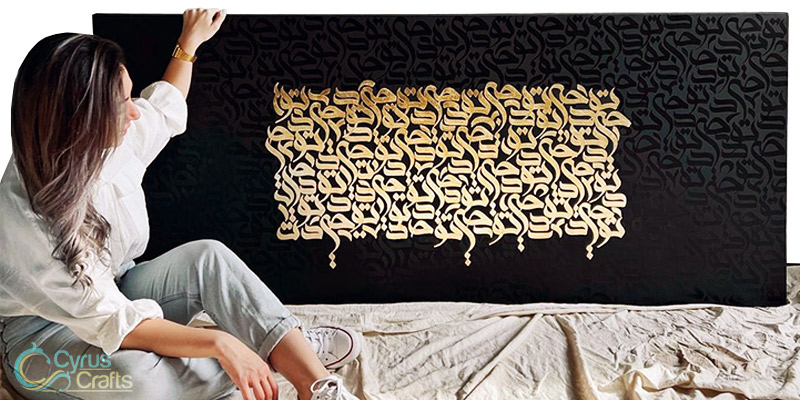 Buy Calligraphy Paintings and Posters as a Wall Decor Element

The use of calligraphy, one of the oldest and flawlessly beautiful forms of Wall art, in the interior design of a home reflects the excellent taste of the homeowner in art.

Calligraphy of the Qur'an

Naskhi was the style used in the earliest Qur'ans written on paper or canvas. The style of calligraphy was developed in the 10th century by the Abbasid calligrapher Ibn Muqlah (886-940), and it was continued by Ibn al-Bawwab (1022). It refers to the verses of the book Qur'an and some of the most popular verses are "ayatul kursi calligraphy", "salavat calligraphy", "wa in yakad calligraphy".

Framed/canvas calligraphy comes in various color schemes, calligraphic styles, page border decorations, and frames, allowing you to find works that best fit your interior design, be it classic or modern.

Traditionally, the only way that calligraphy could decorate your home was in its framed/canvas form. Today, however, innovations in interior design and the modernization of traditional Persian arts have enabled décor calligraphy to go beyond the framed/canvas limit. There is now a great variety of items that incorporate Persian calligraphy into their design.

Cushions, tables, and chairs are among the most popular furnishings today. When adorned with letters and words in calligraphy, they can liven up a room.

After the Islamization of Iran, the Naskh style of Persian calligraphy rose to popularity and, about 600 years ago, Mir Ali Tabrizi incorporated it with the talaq style into Nasta’liq. Famous as the “bride of Persian scripts,” Nastaliq is one of the most beautiful and artistic scripts in the world.

Among the prominent Iranian calligraphers is Mir Emad Hassani, who is regarded as Iran’s greatest calligraphy master. He lived about 450 years ago, during the reign of Safavid king Abbas the Great. Mir Emad’s calligraphies are found in great numbers in buildings from the period. By making some changes to Nastaliq and introducing new stylistic rules in Persian calligraphy, Mir Emad enhanced the elegance of the script.

Mohammad-Reza Kalhor was another great Iranian Nastaliq calligrapher, who lived about 200 years ago, during the Qajar era. Similar to Mir Emad, Kalhor added to the rules of Nastaliq calligraphy. His work was so influential that modern Nastaliq can be said to be partly the result of his artistic taste and attitude.

Among contemporary Iranian calligraphers, Gholam-Hossein Amirkhani stands out as one of the most accomplished.

Today, Persian calligraphy is used also as a decoration in the Interior Design of homes and businesses, in different forms, such as the so-called “framed/canvas calligraphy.”

Cyruscrafts specializes in the supply, sale, and export of the finest calligraphy wall rugs and wall-hanging carpets. We bring you high-class, one-of-a-kind products that will liven up and individualize your home or workplace.

Decorative Calligraphy "There Is No God But Allah"

Decorative Calligraphy "The Message from Fishes"

Decorative Calligraphy "The Miracle of God"

Decorative Calligraphy "The Sound of Silence"